Businesses needing multi-channel customer support software that allows agents to help customers over multiple communication channels, managing all of their interactions in one place.

Nextiva Service CRM is a multi-channel customer support and customer experience software that allows agents to help customers over multiple communication channels, managing all their interactions in one place. With Artificial Intelligence tools, an intuitive rules engine, and database builder, businesses can automate workflows to save time and effortlessly gain insights from the data. Comprehensive experience scoring and patented SmartTopic technology give companies a holistic view of customers. 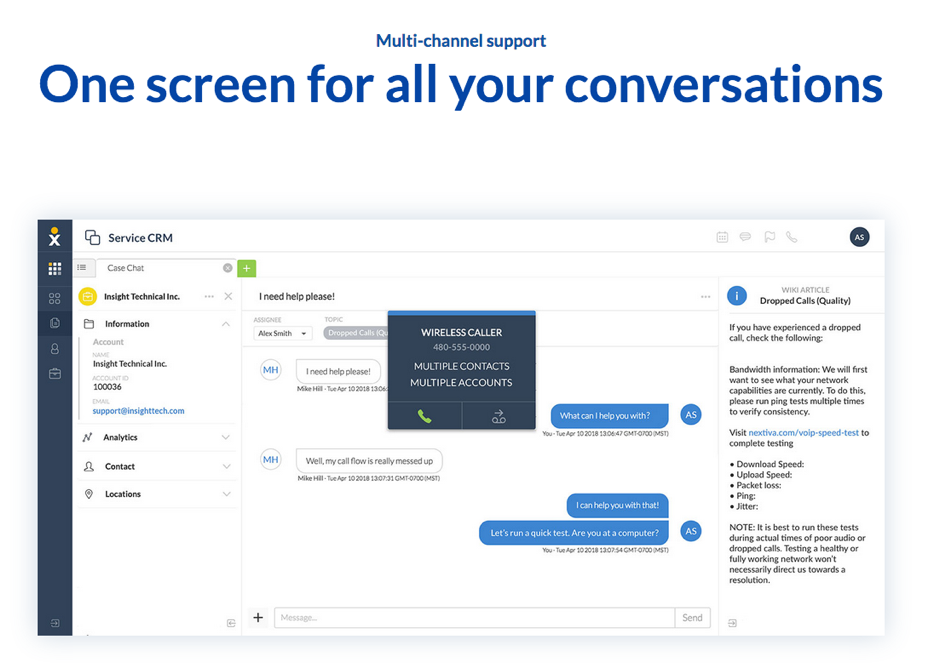 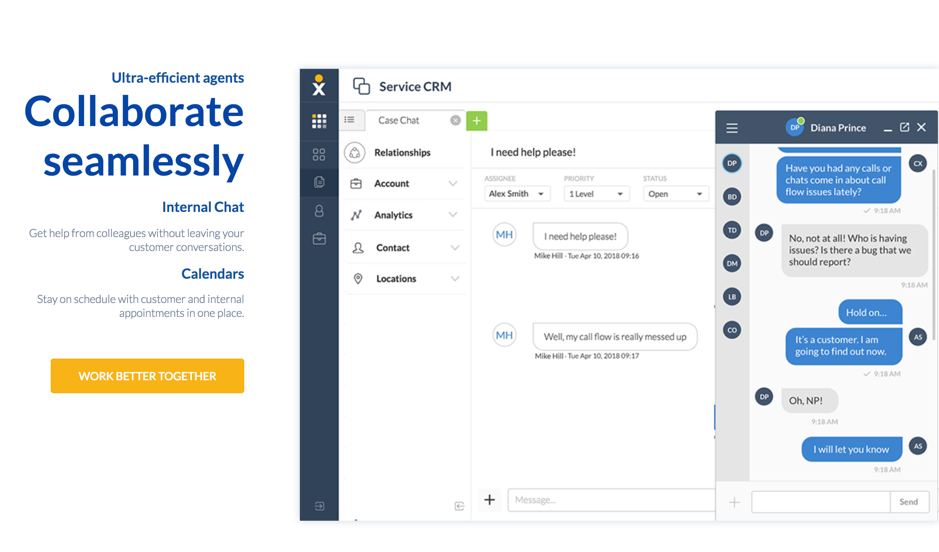 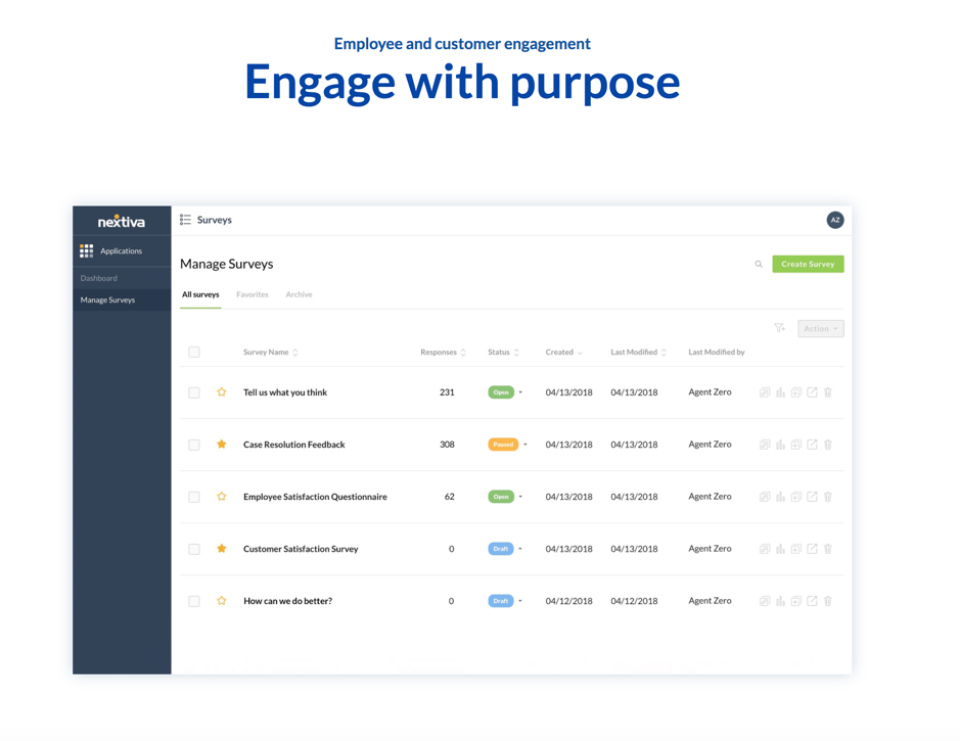 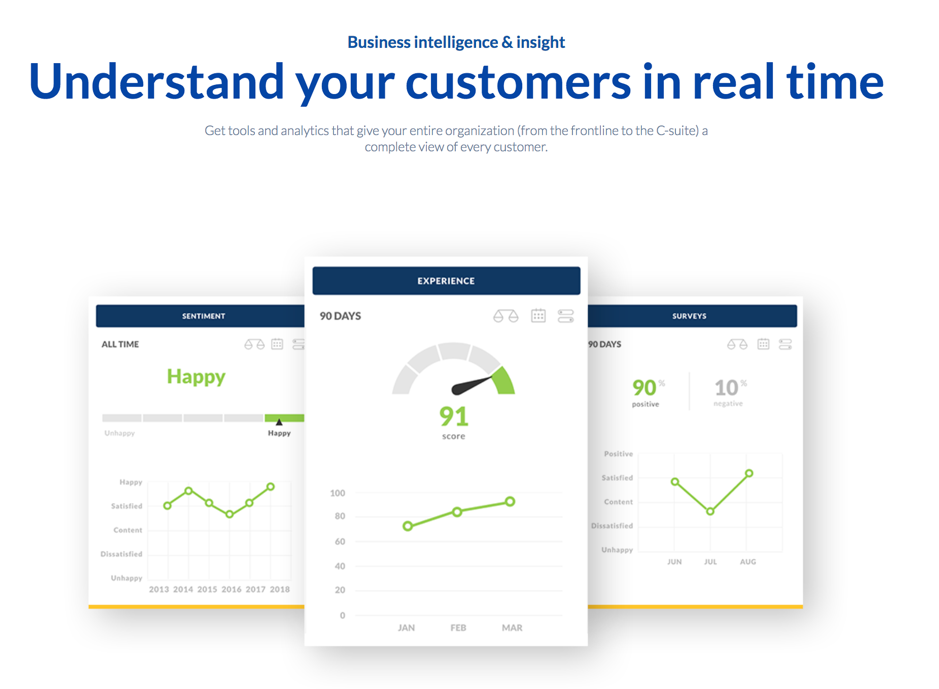 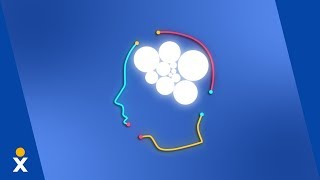 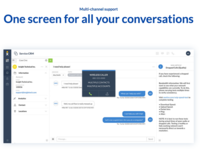 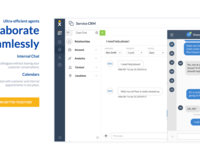 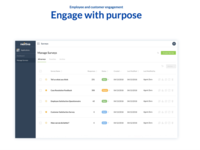 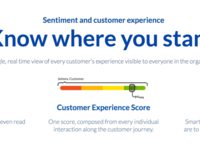 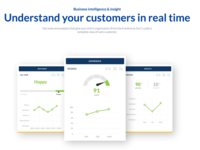 "Nextiva delivered for our business"

Vantagens: 1. What a difference a new system can make on your business. Now, phone calls are going to the right individual in their department. Before using a VoIP service, our whole system was a mess. We had no department structure regarding calls, and they were being answered by the closest person to the main phone in their department. The quality of the service is great, too. Every call has been crystal clear, and no dropped calls.
2.) Easy to use for our company. We have several employees that range from their mid-20s to 50s. After a week of using the NextOs; they all understand how to use the phone, and the app. The app has added a new communication layer for our business. It's gave all our employees the ability to chat with each other on the app and eliminated the need to text on a personal cell phone.
3.) So far if we have any questions, we have a support representative that we can email or call with any questions. The whole concept of a VoIP phone system can be intimating, but the on-boarding process made it a lot smoother and easy for our IT department.
4.) A neat feature that we just started to use is Nextiva Analytics. It provides you with all the data that you need to analyze your calls. You can see the various data regarding your calls and do business adjustments. It’s like a top overview of your call data.
5.) From our first sale’s call to when we call now, everyone has been professional and polite at Nextiva. We are comfortable with their service, and their team. We

Desvantagens: What we liked least about using Nextiva is the onboarding process took a bit longer than we expected. We had a delay porting our numbers to Nextiva. Beside this small headache, we have had smooth sailing.

"Nextiva the Good the Bad and the Fugy"

Comentários: The best things about working with Nextiva are
1. Our Sales Rep .
2. Amazing! HD Call quality compared to our old VoIP Service.
3. Versatility of the software. Our Sales Rep worked his ass off for us. And had the patience of a saint with my million and one questions, and reworking the quotes to our needs over & over & over....
Over a years’ worth of questions and reworking the quote to something we could get the big boss to sign.
Let’s be realistic any time you are making this big of a change to your corporations 30+ phone network in multiple states. it will never go 100% perfectly without a hitch as much as you prepare and strive to make every preparation.
Two months before our ISP was to be installed was when we had our first glitch at the beginning of the setup process while I was on vacation with the family, and only had access to my Cell phone.
And I got the much-dreaded email from the Boss saying no-one can call in on our Toll-free phone number. We’re losing sales! What’s going on? This could be a career-ending type of event. Our toll-free number just stopped working 2 months before the date we requested the porting to take place. I Called the sales rep. He assured me it wasn’t anything that Nextiva did.
About 15 minutes later the sales rep called me back. O’ My god it was us!
He figured out what happened and mad things happen on his end to get our phones back up temporari
He Saved my Bacon!

Vantagens: Ease of use to add and manage users in multiple cities and states remotely.
Ease of adding new phones or devises Like VoIP PA Speaker in the Factory. And cordless phones as a secondary phone sharing a single Ext # with a desk phone.
The old Cell Phone App. (not the new one) everyone loved this App.

Desvantagens: 1. Build Call Flow is a total Fake selling tool used to show potential customers how easy it is to configure your call flows. It’s total BS. If you call customer support to assist you in a new configuration they tell you. O that doesn’t really work anymore, we need to configure it on the back end for you. Don’t try to use it.
If it’s nonfunctional don’t try to sell me on how easy it is using it.

Comentários: Excellent customer service for the most part but the manager who replied to my emails once did not reply back or call me back and I had to call at least 3x to get this matter of our cancellation resolved. I would like to commend [SENSITIVE CONTENT HIDDEN] though as he went above and beyond.

Desvantagens: My Assistant set this up in 2018 and we fulfilled a 2-year plus contract then was charged a significant cancellation fee because we switch and I did not know contracts automatically renewed. That was really a bummer given that my store was closed for 3 months and lived on grants and loans but I do not know what they're going through so maybe they needed these fees for survival as well. They were reasonable enough to cut it into half. So I did not use the phone much but I did not like that the contract automatically renewed and was subject to a hefty cancellation fee.

"Do Not Do Business With This Terrible Company"

Vantagens: Nothing. This product was absolutely horrible - but the customer service was even worse. Customer Service and Tech Support know very little about what they are selling. See full review below.

Desvantagens: customer service, technical support, customer relations. All of their team does not work together and none of them know what they're talking about. Their service states that it will work with ANY DEVICE, and it is NOT TRUE.

"Overall the product works and I see it improving overtime"

Comentários: Overall this product is well worth the money, especially if everyone in the office is working remotely, its easy very user friendly, and customer service has been helpful when needed.

Vantagens: This product overall is easy to use with minor glitches that I see improving over time, and granted I just started to use this product during a global pandemic so all wifi based programs are experiencing much higher use rates. This program has an app that's on your personal cell phone, and the app is extremely east to use, the layout is honestly perfect. I'm easily able to answer the call, mute it and transfer to who it needs to go to.

Desvantagens: The only con I have so far I feel as though may be just due to not knowing the program fully yet, but sometimes the call will flash on my screen and then disappear and say I have a missed call. Which is then confusing because I'm not sure if its truly a missed call or another office user picked it up.